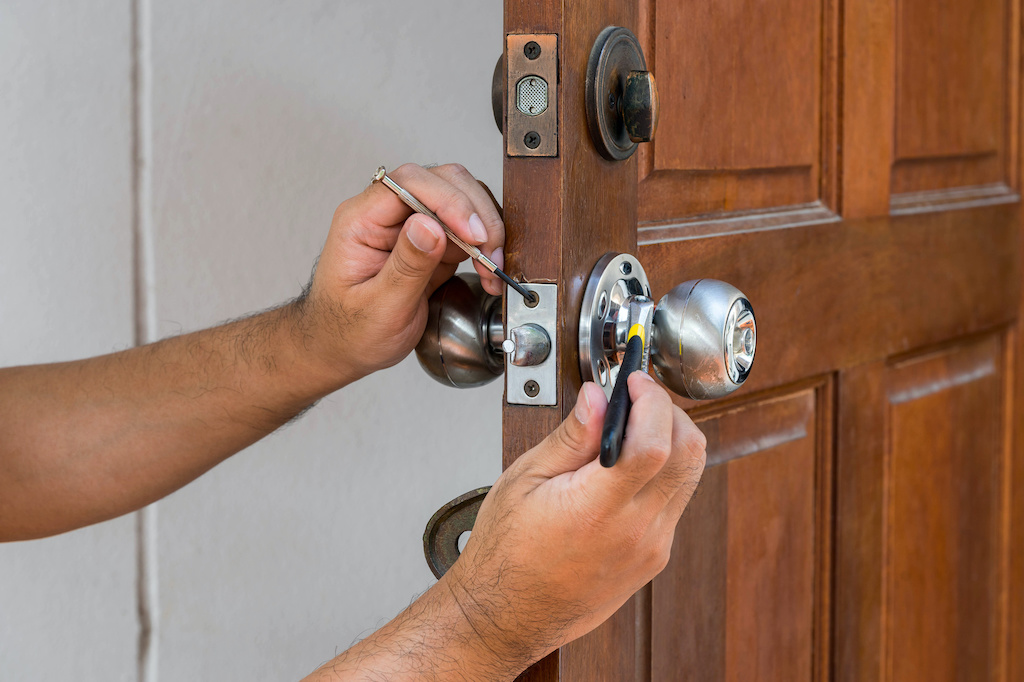 Do locksmiths really make locks? Today, probably not. They do, however, need to understand how locks are made so they can do their jobs effectively. Making locks is also part of the long history of their trade—as you’ll see later in this article.

Today’s locksmiths are too busy to make looks, even if they did know how to make all the different kinds of locks that exist now. What keeps today’s locksmiths busy is all the lock and security-related calls they get.

This article looks at how the locksmithing role as it’s evolved. We start from a time when locks were made by hand and continue to what locksmithing is like today.

Times When Locksmiths Made Their Own Locks

Historians tell us that locksmithing began in Ancient Egypt and Babylon some 4,000 years ago. This remarkable occupation eventually spread to Ancient Greece and Rome. It seems to have been developing in China around the same time.

These early locks were made of wood at first, but as they spread into Europe began to use metal. Metal locks were used in Europe during the Middle Ages, as well as in China.

These were simple locks, and it isn’t surprising that they would have followed from the locks of the earlier empires. It’s believed that locks were used widely in Medieval Europe, especially among the nobility.

They needed some way to protect their castles and possessions while the men were at war. The lady of the manor was charged with the safekeeping of the keys.

Inventors experimented with new lock types during the Renaissance and Enlightenment periods. However, what we would call “modern locks” didn’t emerge until the 18th and 19th centuries—mostly in England and North America.

In the American colonies during the mid-1700s, the locksmith role was already an adaptable one, with those making locks also working as blacksmiths, tinsmiths, gun makers, and even plumbers. Just like today, locksmiths were “jacks of all trades.”

Throughout all these centuries, locksmiths (probably not known as locksmiths at the time) had been making locks. As industrialization kicked into high gear a century later, though, like many other products, locks began to be mass-produced.

Industrialization also brought about the specialization of work. In pre-industrial times,  farms or households were the primary centers of productions. They integrated all their members in the processes of making or trading what was needed to get by.

The Industrial era introduced the idea of jobs, careers, and workplaces—which split many families apart for large portions of the day and week. Men went to work in offices or on assembly lines while most women sustained domestic life.

Still, unlike those in other manufacturing trades, locksmiths, by and large, did not move to assembly line jobs. Instead, they opened their own locksmith businesses to install and repair mass-manufactured locks.

Also, while many other young professionals were entering specialized training programs, locksmiths continued to learn through direct, hands-on experience.

This experience often  included apprenticeships, when a locksmith was starting, and ongoing professional development of various kinds later.

Even in the 21st century, many locksmiths still carry on a tradition that dates back to the Middle Ages: the apprenticeship.

Quite a few locksmith schools and programs have developed over the years. Yet, many of today’s new locksmiths still prefer to learn on the job, under the guidance of a master locksmith.

With all the concern today over personal and home security, locksmiths are busier than ever. Locks and other entry systems have grown very sophisticated (yet still in high demand)—as anyone who’s ever tried to DIY a smart home can readily attest.

So, we find it remarkable that locksmiths have upheld so many earlier traditions from their profession. Recalling much earlier times, today’s locksmiths have augmented their repertoires with additional, related services.

Everything Today’s Locksmiths Do

To our knowledge, locksmiths no longer double as metalsmiths, gunsmiths, or plumbers. They do, however, include:

It’s also worth mentioning the importance of a locksmith’s van in today’s society. These vans are nothing short of highly functional repair shops on wheels. Mobile locksmiths especially need to carry just about anything they would ever need in these traveling shops.

As one locksmith put it when interviewed, “I have all my key shelves for automotive up here. I have all of my commercial and residential locks, and my pinning kit. I have all my transponder keys for various cars down here.”

What You Can Learn from a Locksmith

When you first hire a locksmith, it’s good to ask them a series of questions about their training, experience, credentials, and so on. You can find suggested questions easily online.

You shouldn’t stop at the perfunctory items, though. Most locksmiths love their work and have great stories to share. In addition to asking just “nuts and bolts” questions, why not allow the new locksmith to share her or his passion for the job?

Locksmiths of the Future

This little written journey through the history and present state of the locksmith business wouldn’t be complete without a look at where it’s headed from here.

It’s impressive that locksmiths today still operate much as they did centuries ago, but, yet, still manage to keep their business innovative and on the cutting edge of technology. Plus, there seem to be very few who don’t enjoy what they do.

With new security fears (and the accompanying needs) continue to arise nearly daily, we should expect to have locksmiths available and ready to help us well into the future—probably treating their jobs as they always have.

Keep reading our blog for more exciting stories like that of the locksmithing business. You’ll see that there’s always something new to learn!

5 Tips for Finding Relief When Living With PTSD

3 Tips for Organizing Your Walk-In Closet

Home Automation Can Help You Save Money

Jumbo Loans 101: What Is a Jumbo Loan and How Does it Work?

3 Big Benefits of Oil Heating in Your Home

Things You Should Know About Property Cleaning Services